We now have 5 rows of freshly planted Onion seedlings! At one point today all 6 of us set about the task of digging and planting our Onion seedlings in the hope that in a few months, with the help of some lovely sunshine and water, we'll be harvesting a crop.

I'd never have thought that I'd be actually thinking about things like irrigation, seedlings, and fertiliser. Yet today we went to buy some Sheep's manure to help the growing process. I feel such a learner, yet we're managing to get by. When i was asked a question today, my answer was either, 'i don't know', or 'I'm not sure'.

I hope our hard work pays off. I'll put up a photo of our lovely handiwork.
Posted by Bruce Gardiner-Crehan at 11:42 PM No comments: 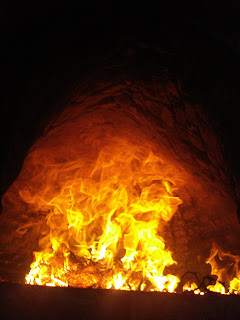 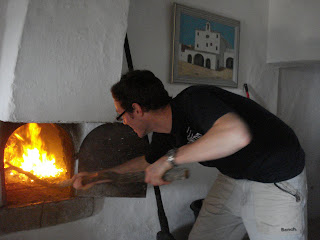 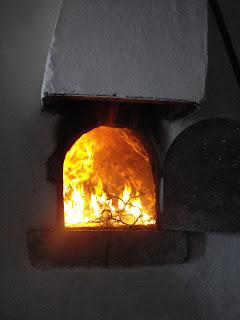 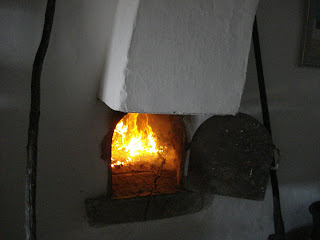 Having cleaned the Bread oven a few weeks ago, i decided today it was time to see how it worked and to see what i could do with it. Well, the only word i have is 'awesome'!!! I gathered loads of little branches and the like and lit a small fire in the middle of the oven. It's a huge oven - i actually got in it when i was cleaning it - it's that big! I then began to add branches to really get it going.

As you can see in the pictures, we got the fire roaring and it looked so cool. At one point fire was leaping out of the front and up the chimney. Had Pepe not been there i might have thought I'd let it get out of control - but he assured us that it was normal. Pepe is friends with our landlord and is being such a legend - always helping and fixing things.

I think the temperature must have been at least 300 degrees. Apparently it keeps its temperature for a few hours, and you can cook meat/veg or bread - anything in fact. I hadn't actually prepared any dough or food to cook but at least it's now ready to use.
Posted by Bruce Gardiner-Crehan at 2:17 PM 1 comment:

Rosemary grows EVERYWHERE in Ibiza. Every valley and hill and cliff is covered in it. It seems to have completely gotten out of control, and best of all - it's all over our land. It's great to just pop out and go and pick some to go with your food, or bash up in a pestle and mortar to go on some spuds. Love it!

Bob and Claire came round this lunchtime - they run the Anglican Church here in Ibiza. They both used to live and work as missionaries in Mexico for many years and Bob is a qualified expert in agriculture and farming, so we picked his brain all day! It's actually one of the reasons we invited them round, that and that they're awesome people! He's helping us identify the best areas to plough and plant; what is what when it comes to spotting trees and veg, and how best to tackle irrigation. I'll keep you posted on how the farming goes.
Posted by Bruce Gardiner-Crehan at 10:39 PM No comments:

I've started reading a great book by Stephen Armstrong called 'The White Island'. Did you know the name 'White Island' comes not from the drug but from the mineral salt? Ibiza, at one time, was the largest salt producer in the whole of the Mediterranean. As trade and exports increased between empires, a way of feeding the thousands of sailors was required, and thus the method of salting fish became the most popular way of preserving the fish. From our farm you can see the salt flats in Salines, and for many centuries Ibiza made vast amounts of income from the precious mineral.


The book also traces Ibiza's history right back to The Phoenicians. It unpacks the reasons why the Island has always had such a magical pull to such a vast array of bohemians, hippies and pleasure-seekers.

I've just started reading it but hope to learn as much as i can about the Island that i live on.
Posted by Bruce Gardiner-Crehan at 12:47 AM No comments:

What would your answer be?

I think The Alpha Course is such an excellent introduction into the Christian faith. It's intention is to allow people to learn more about Christianity in a non-threatening environment. Each week you listen to someone talk about various different topics.

I went on an Alpha course once when i was about 19, accompanying my big Sister. But now I've just completed Week 2 of helping to run an Alpha Course that the Anglican Church began. It's been such a breath of fresh air for me, helping breath life into my own faith and the questions that surround it. I'm helping lead the discussions for a small group of young people and they have some great thoughts and questions. So far we've discussed 'Who is Jesus?' and 'Why did Jesus Die?' Am really loving being involved in this.
Posted by Bruce Gardiner-Crehan at 9:31 PM No comments:

The Peugeot is nearly dead!!! 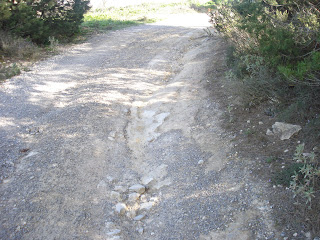 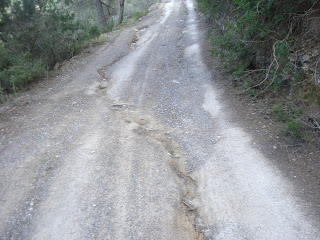 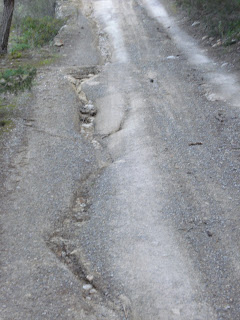 The road up to our farm is so bad that the exhaust came off the Peugeot about 3/4 of the way up the hill. So we tied a rope around it and i followed behind running and lifting it off of the ground. Talk about nightmare.

We're going to get our path sorted as we know someone who knows someone who can do it for us for a fee. There are large potholes and huge indents which take it's toll on our vehicles. Helen and i are praying for a 4 x 4. At present we're looking into which is the most economical and value for money. We'd love a pick-up, but any old second-hand 4 x 4 will do.
Posted by Bruce Gardiner-Crehan at 3:13 PM 1 comment:

With all our internal heating coming via our wood burner and the open fireplace, we thought we needed to invest in some decent wood cutting equipment. And guess what? I'm getting to grips - literally, with how to use a chainsaw. It's great fun, but also very scary. But i am feeling like i'm mastering the art...

So this past two weeks we've been seeking out fallen trees on our land, cutting them up and collecting and storing the wood, and it's such a pleasure to heat the house by lighting fires...but i feel i'm constantly smelling of smoke.
Posted by Bruce Gardiner-Crehan at 11:31 PM No comments: