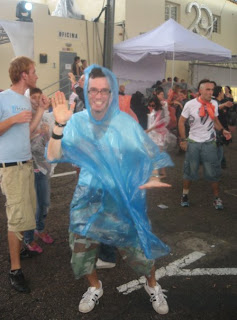 Space Closing was great today. It's the party that officially ends the clubbing season here in Ibiza. Not only does Space hold about 3000 people, but they open the car park at the back that holds at least another 5000 or so.

These are some of the DJs we saw - firstly Sneaky Sound System, who seems to be making a big name for himself (really filthy big beat music), then a live set from Pendulum, both outside and the latter one in the heavy rain - but we got handed some rain coats at the entrance - which were much appreciated. It was funny dancing in the rain. We then headed indoors to the Sunset terrace and stayed there for ages. It has such a great atmosphere, and the vibe is amazing.

Back outside to see Wally Lopez before heading to see Tom Novy smash the sunset terrace. He plays such groovy, uplifting tech-house, the kind that makes you smile and put your hands in the air. The more i hear House music, the more i like it with melody; need it to be uplifting and with vocals thrown in for good measure. Best choons today were 'Open your eys' by Snow Patrol and 'You've got the love' by The Source. Awesome choons. He finished with 'With or without you' by U2. Yes!

We missed loads of other DJs as we had to be back, but it was great to get to the closing party of the year. It really is the party to finish on and celebrate such a great summer.
Posted by Bruce Gardiner-Crehan at 1:41 AM