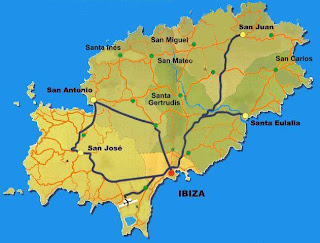 Well, without wanting to rub it in, well ok, i do want to a little, Freddy, Agneta and i hired scooters for the day and toured the whole of Ibiza. After thinking hard for several minutes about the safety of renting scooters, i'm glad we did, as all i can say is that it was magical - that's probably the best word to describe it. The scooters were only basic 50cc bangers, but they were fairly zippy! We spent 8 hours making our way around the whole Island. We began in San Antonio, turning North to Santa Ines. We then headed towards San Miguel, stopping only for lunch before popping down to Benirras to take in the views. From time to time i thought to myself, 'i've never been that way, let's go and see what there is'. So quite often we'd head down some country road and find some amazing views. All along the way there were winding country roads, lovely views of awesome cliffs and secluded villas here and there. Boy i wish i owned one of them beauties - villas i mean. One day...

From San Miguel we travelled to the very North-easterly point of Ibiza called Portinatx. We didn't really spend as much time there as i would have liked as it's very beauitful round there. From there we headed down to Cala San Vicent and had a spot of 'Fika', a lovely Swedish word for 'snack'. We then motored down to Santa Eularia, past Ibiza Town and on down to the Salt Flats of Salines. We visited a gorgeous beach that we found a few months ago called Es Cavallet, only to realise that it's actually a nudist beach. Quickly leaving there, we headed out past the airport and up to San Josep, before returning to San Antonio.

The fun part of all of this was being able to drink in all the breath-taking views of this gorgeous Island, and to do it with such good friends as Freddy and Agneta. Needless to say, Freddy and I really pushed the bikes, often finding no traffic on the country roads and some very straight ones at that! It was such good fun. Having Agneta there helped us from going too crazy as we'd always have to stop and wait for her. We sometimes had to go back to see if she was ok...haha!

I think i'd do it again next year too. There's lots more to see. Hopefully Freddy will send me some photos that he took of the 'sights' of Ibiza. I'll put some up here soon.


Posted by Bruce Gardiner-Crehan at 4:34 PM

It was great taking a lap round Ibiza. I'll send you some pictures, I just have to sort out some good ones out of the about the 5000 I got from Spain. :)

i told u i was scarred by the naked old men there!!!

Awesome to take the tour in with you buddy...looking forward to the photos!