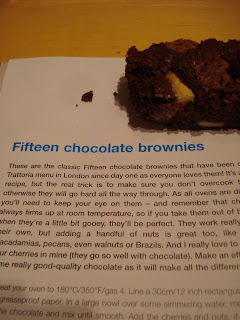 I made some scrummy brownies last week and they came out amazingly well. They were triple choc brownies, with dark, milk and white chocolate. They tasted awesome!

Here's a picture. Think i'll be making them again.

I actually made them for a leaving meal that i did for Poppy Wiliams. It's really sad that Poppy has left. She hails from Ohio in the States but currently resides in Las Vegas (the other sin city). She was such an inspirational woman whilst she was here, and she has such a heart for God and for prayer too. You know when you learn loads from someone without them really teaching or saying much? She's that type of person - really open to God and humble too.

The exciting thing is that i have a feeling that she'll be back on these shores to work with 24-7 Ibiza again. I wonder if a generous portion of triple chocolate brownies might help her come back here quicker?
Posted by Bruce Gardiner-Crehan at 5:17 PM

Bruce!
Are you trying to make me cry?! If so...mission accomplished! I miss you guys soooo much! I think if you sent me so brownies, I might be back tomorrow!