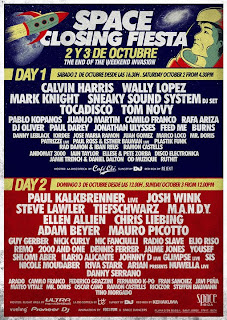 Yes, i went to Space Closing.
Yes, it was immense.
Yes, i danced from 9pm till about 5am!
And...Yes, my back was wrecked!

Poppy, Neil and i had a right result as we got in for free, which i never thought would be possible at such an event. My friend James is the manager of both Josh Wink and Riva Star, and they were both playing that night, so we were on one of the DJ´s lists. My fav act of the night was M.A.N.D.Y, and they rocked the Terraza, playing lots of techy, deep house. I loved their set, and even better when i bumped into some worker friends of mine. It was great to catch the outside flight arena too, seeing Steve Lawler play to about 4000 people.

It was a great way to celebrate the awesome summer that we´ve had, and i loved finishing the summer on such a high.
Posted by Bruce Gardiner-Crehan at 7:31 PM